Semaphore is a hosted continuous integration and deployment service used for testing and deploying software projects hosted on GitHub and BitBucket.

You can create your workflow and pipelines by writing YAML configuration files and committing them along with your source code, or using the intuitive Visual Builder that Semaphore includes.

The Cloudsmith CLI gives you full control when connecting to any CI/CD process; allowing you to upload any of our support formats or query your repositories. Just configure your API Key, install the CLI, and you'll be all set. 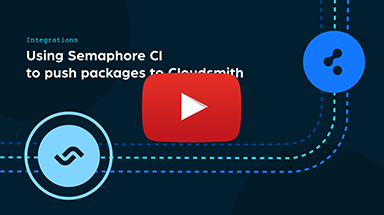 In the following examples:

You can add a secret using the Semaphore CLI or the UI:

To Push a package to Cloudsmith from a Semaphore CI Pipeline, you just need to add your Cloudsmith API Key secret and the cloudsmith push CLI command to one of the blocks in your pipeline

The push command will vary with the package format, an example of the push command for a debian package would look like:
cloudsmith push deb my-org/my-repo/ubuntu/xenial foo-1.0.deb

Please see the Cloudsmith CLI for full details of the push command for other formats and additional help).

In the above example, we use the command executed during the block prologue to install the Cloudsmith CLI, so that the cloudsmith push command is available.

In addition, we also use the cache restore command to retrieve the package file that was built in a previous block. Please see the Semaphore Cache documentation for more detail on storing and retrieving artifacts using the Semaphore cache

Where supported, you can also use native publishing commands like docker push or npm publish instead of using the Cloudsmith CLI, provided you have installed the necessary tooling as part of your pipeline block setup.

With support for all major package formats, you can trust us to manage your software supply chain.