Docker is an ecosystem that is used to run packaged software known as containers. A container image is bundled with all of the software and configured required to run as an independent process (or collection of processes), and an executing container is isolated from other containers and processes.

Docker provides the concept of the registry as a storage service for storing and distributing image containers for use. The official one of which is DockerHub, which is owned and operated by Docker itself.

Cloudsmith provides a fully-fledged Docker registry with full compatibility for current and future versions of the Docker engine and container image formats. With Cloudsmith you'll be able to push, pull, inspect and manage container images, privately and publicly.

All of this is provided with the standard functionality and features that are offered in the Cloudsmith platform, such as collaboration, advanced permissioning, whitelabelled distribution, multi-tenacy with other packaging formats, etc.

The examples in this document are generic. Cloudsmith provides contextual setup instructions within each repository, complete with copy n' paste snippets (with your namespace/repo/rsa-key pre-configured). 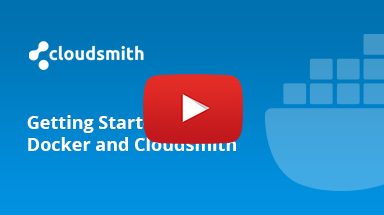 For clarity, it's important to note some of the differences between a registry such as DockerHub, and a Cloudsmith Docker registry. These are both naming and functional in nature.

Docker defines the following names (this is not the official wording):

Therefore, based on the above, the following terms are equivalent:

For consistency, the Docker terms will be used within all of the Docker-related documentation but please be aware of the differences if looking at documentation elsewhere.

We have attempted to achieve absolute compatibility at the wire (API) level with DockerHub and the Docker registration specification (2.0). The functionality differs in how the registry itself is treated.

As such, it is also not possible to have a global registry of all images on Cloudsmith. This may change in the future as we introduce different forms of Cloudsmith repositories and groupings.

In the following examples:

If you have added a Custom Domain for Docker, you must use it to authenticate and push. Please replace docker.cloudsmith.io in the following instructions with the Docker custom domain you have created.

The endpoint for the native Docker API is:

Or if you're referring to it from docker commands:

In order to authenticate for native publishing, you'll need use docker login:

To publish an image to a Cloudsmith-based Docker registry, you first need to tag your image:

You can then publish the tagged image using docker push:

To upload via the Cloudsmith CLI or Website. you need to export your Docker image first. You can do this with:

This exports the full contents of the image, including all metadata and layers.

For full details of how to install and setup the Cloudsmith CLI, see Command Line Interface.

The command to upload a Docker image via the Cloudsmith CLI is:

Please see Upload a Package for details of how to upload via the Website UI.

For public registries, no further setup is needed as authentication is not required.

The setup method will differ depending on what authentication type you choose to use.

Entitlement Tokens, User Credentials and API-Keys should be treated as secrets, and you should ensure that you do not commit them in configurations files along with source code or expose them in any logs

You need to authenticate via docker login to pull images:

Pulling (downloading) an image from the Cloudsmith Docker registry can be done using the standard docker pull command:

To refer to this image after pulling in a Dockerfile, specify the following:

The Cloudsmith Docker registry implementation currently has the following limitations:

Unless otherwise specified we'll be working on removing these limitations in a near-future release.

Please see the Troubleshooting page for further help and information.

With support for all major package formats, you can trust us to manage your software supply chain.